Africa is filled with amazing tribal traditions you didn’t know about. Traditions with diverse, rich and unique qualities that you will be thrilled experiencing them. Listed below are some of these beautiful African traditions:

1. The courtship dance of the Wodaabe

The Wodaabe are a small subgroup of the Fulani ethnic group. Nomadic cattle herders and traders in the Sahel, stretching from southern Niger, through northern Nigeria. They also cover northeastern Cameroon, southwestern Chad, western region of the Central African Republic and the northeastern of the Democratic Republic of Congo.

The Wodaabe engages in an interesting human mating ritual, that occurs annually: The Guérewol. The Guérewol is an elaborate ornamentation and traditional face paint that the men wear while dancing to get the attention of single ladies. The men also roll their eyes and display their teeth to showcase their s****l appeal.

2. The lip plates of the Mursi

The Mursi tribe of Ethiopia, or Mun as they prefer calling themselves, are people indigenous to the Nile Valley. The women wear large pottery or wooden plates on their lower lips as tradition. At age 15 or 16, a Mursi girl is cut open on her lower lip. The cut is held for at least three months by a wooden plug until it heals. This action is totally on a girl’s personal decision. Interestingly, Mursi practices the Egalitarian principle.

Also Read:
– Learn The History Of The Argungu Fishing Festival Of Kebbi State
– Why You Should Have Your Traditional And White Wedding On The Same Day
– These Seven Reasons Will Make You Want To Visit Badagry Town

3. The bull-jumping of the Hamar

The Ethiopian Hamar tribe, also known as the Hamer tribe, is made up of cattle rearers who treat and respect their cattle as treasures. They engage in a ritual that exhibits lots of athletic initiation. One such is the art of bull jumping.

It is a three-day rite of passage that all boys must attempt. It is also extremely important for the dignity of both the participant and his family.

Fifteen castrated cattle are lined up with slippery backs (rubbed in dung) and the participant is made to walk over them without falling down. If he succeeds, it proves his maturity and readiness to marry a girl that his parents choose. He can then settle down and raise his own kids and cattle. If he fails, he’ll wait another year, to prove his worth.

4. The red ochre of the Himba

Girls in the tribe start using the otjize as soon as they are old enough to care for their own hygiene. Many claim this act serves as sun protection and insect repellent. While it might be true, the Himbans say, this tradition it’s only for aesthetic purpose, as you will apply make-up regularly.

5. The spitting of the Maasai

The Massai people of Kenya and Northern Tanzania view spitting, as a blessing and sign of respect. Guess their hands must smell a lot because they spit on each other’s palm before shaking.

They also spit on a new baby, to wish him/her good luck and long life. These people also grace weddings with spittle. A bride’s father spits on her forehead to bless her union. Weird right? There are more African traditions below.

6. The healing dance of the San

San or Saan people, also known as ‘Bush Men’, are members of various Khoisan-speaking indigenous hunter-gatherer groups. They are also alleged to be the first nations of Southern Africa. Their territories span across Namibia, Angola, Zambia, Zimbabwe, Lesotho and South Africa.

One of their integral traditions involves a healing dance. The community gathers around a burning fire, led by community elders and healers. This dance quells physical sickness and expels ‘star sickness’, a force that fosters jealousy, anger and arguments in the community.

7. The wedding ceremony of the Ndebele 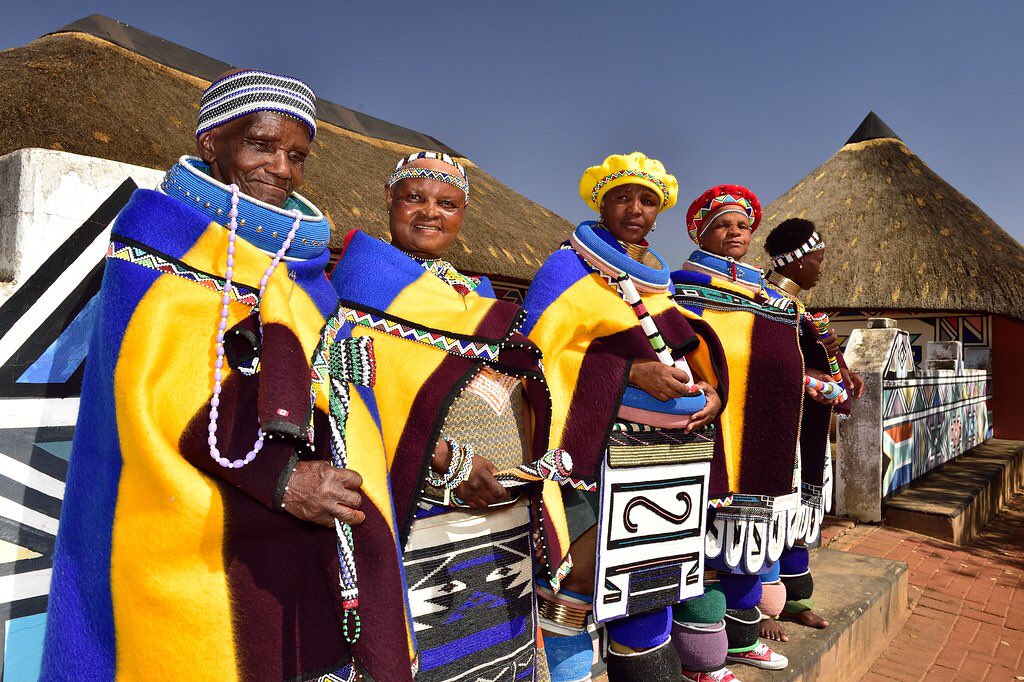 The Ndebele people from South Africa have a beautiful wedding tradition that’s all about the bride. The Mother-in-law adorns the bride in a very colorful Jocolo, made of Goat skin and adorned with beautiful, colorful beads. All married women at the ceremony also wear the Jocolo. The Groom performs a ceremony to honour his wife, he also gives her thanks and credit for her effort on their marriage.

The traditions listed above do not in any way exhaust all that Africans practice. Keep learning about this beautiful continent and its traditions.